Poultry coccidiosis, which commonly occurs in chicken farms all over the world, is a gastrointestinal disease caused by protozoa, and it is also one of the most troubled diseases in the chicken farming industry in many countries. Chickens infected with coccidiosis will getting worst symptoms when having bacterial enteritis at the same time. Mild infection cases have no obvious symptoms, but severe infections cause intestinal bleeding, inflammation, swelling, and thickening of the intestinal wall. These diseases in poultry can cause poor digestion and absorption, diarrhea, dehydration, and even death. Even if poultry recovers from coccidiosis, the damage has already been done. Poultry recovered from coccidiosis often do not perform as expected in terms of feed efficiency and growth performance. The global poultry industry's medical expenses for coccidiosis alone can reach more than 500 million USD each year, causing serious economic losses to the poultry farming industry.

The anticoccidial product ‘PureGut’ launched by PureCare Innovation is an anticoccidiosis liquid designed for treating poultry coccidiosis. By blocking the life cycle of coccidia to reduce the number of coccidia in the intestine of chicken and the environment of the chicken farm, and further minimize the incidence of severe coccidia.

4. The anticoccidial mechanism is clear

The ‘PureGut’ was applied to a chicken (Gallus domestics) farm in Kaohsiung. The chicken farm raised 10,000 chickens, which continued to suffer from coccidiosis, causing losses. The ‘PureGut’ was applied to the drinking water with the dilution ration of 1L to a ton of water which allow the chicken can drink freely. After three days of the field trial, the mortality dropped from 74 chickens per day to only 3 chickens per day. The preliminary result is significant. 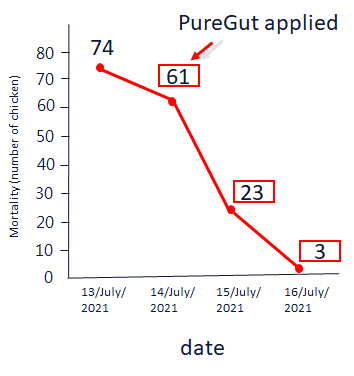